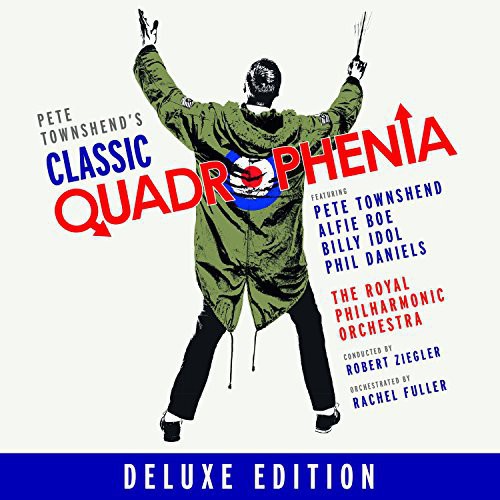 This is the deluxe CD/DVD edition of Pete Townshends Classic Quadrophenia recording. The deluxe edition includes the complete CD and a 44 minute DVD featuring an exclusive on-camera interview with Pete Townshend, a behind-the-scenes look at the making of the album, and the new music video for the song Love Reign O er Me shot on-location at the infamous Brighton Beach Pier in England, site of the Mods and Rockers riots of 1964.

Recorded with the Royal Philharmonic Orchestra in October 2014 at Londons legendary Air Studios, conducted by Robert Ziegler, and featuring popular Decca-signed British tenor Alfie Boe on vocals, with Townshend himself on electric guitar and performing cameo vocal roles along with special guest vocals from Billy Idol and Phil Daniels.

Pete will reprise his roles at the live world premiere at the Royal Albert Hall in London on the 5th of July 2015, alongside the RPO, Ziegler, Boe and other star guests and then at the Metropolitan Opera in New York City on November 8th.

The new symphonised version of Quadrophenia, an album originally released by The Who in 1973, was orchestrated by Rachel Fuller, a professional composer, orchestrator and singer-songwriter in her own right and also the partner of Pete Townshend.

This project is the latest chapter in Pete Townshends lifelong mission to break the three-minute mold of the traditional pop song and take rock music to a higher artistic level. In the 1960s he defined the concept of the rock opera with Tommy, taking it a stage further with Quadrophenia.

Pete began work on the project as part of his plan to leave a legacy of all his work arranged for orchestra as sheet music, for future generations to enjoy. Pete hopes the new work will go on to become a regular part of the orchestral repertoire and boost attendance at classical concerts.

Alfie Boe, who sings the parts originally sung by Roger Daltrey, was also born in 1973 but has been listening to Quadrophenia for years. Its in my blood. I grew up on rock music and always had that fantasy of being a rock singer before I trained as an opera singer. Ive always thought the classical voice can lend itself to this type of repertoire. Its harder than opera, but thrilling to sing. The music is so full of excitement, positivity and strength I wouldnt separate it from a symphony by Beethoven or Mozart - Alfie Boe.