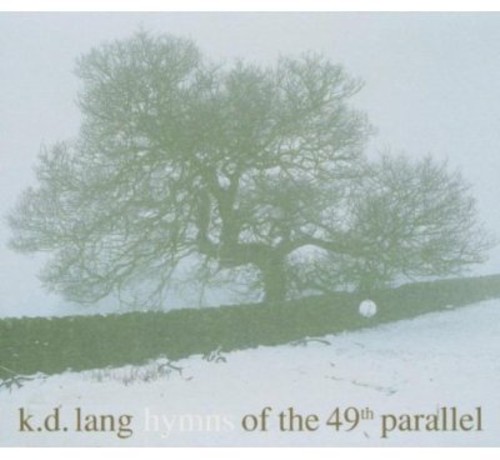 With HYMNS OF THE 49TH PARALLEL, the Alberta native brings it all back home, exploring the work of her favorite Canadian-born songwriters. On this lovingly assembled disc, she juxaposes classics from iconic artists who were her inspirations with equally brilliant material from contemporary performers who remain her fellow travelers.

The Great American Songbook isn't the only body of musical work in North America that merits attention, at least not as far as k.d. lang is concerned. Hymns of the 49th Parallel, the Alberta native's salute to the Great Canadian Songbook, is a lush and stylish overview of 11 songs by countrymen such as Neil Young, Joni Mitchell, Leonard Cohen, Ron Sexsmith, Bruce Cockburn and Jane Siberry. Working with longtime collaborator Ben Mink, lang takes a relatively spare approach to the tracks; there's not much instrumentation-mostly piano, with occasional guitar and mostly subtle string sections-but the soundscape is spacious and full. And that's good, because what should-and does-carry this set is lang's voice, which has continued to mature and expresses obvious affection for the material. Her cover of Cohen's "Hallelujah" is as soulful as the many that have come before, while a resonant organ gives "Bird on a Wire" a truly hymnal feel. Young's "After the Gold Rush" and "Helpless" are appropriately mournful, but lang really scores on the uptempo numbers-the loping, rootsy version of Cockburn's "One Day I Walk," a breezy trip through Ron Sexsmith's "Fallen" and a jazzy take on Joni Mitchell's "Jericho"-where arrangements provide plenty of latitude for her to inject her own personality. After enduring two (soon to be three) of Rod Stewart's plodding Great American Songbook projects, we can only hope to hear more of this more tasteful and invigorating exercise from lang.