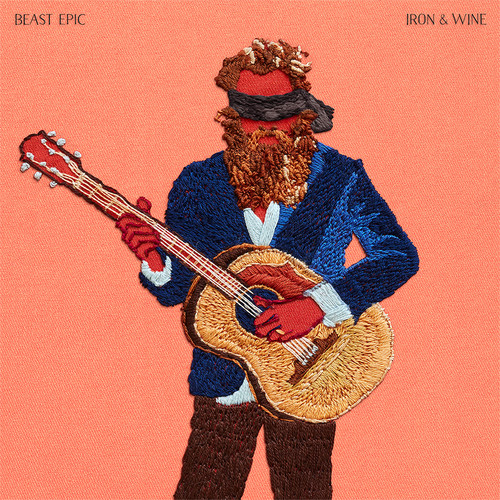 "I can whine about it all but I won't." -Samuel E. Beam The first Iron & Wine song that I ever remember hearing was “Dead Man's Will,” originally featured on the Yeti 1 compilation CD. Its hushed eloquence and unadorned beauty lent it a sort of soft power*, a triumph of instinct over overstatement. That was in 2001. In 2017, Beast Epic, Iron & Wine’s fourth album of new material for Sub Pop and it's sixth overall, recasts soft power as a series of vignettes, observations and regular old songs that redeem through joy and a certain expectation of grace. Even the instant classic, “Bitter Truth”, with a lyric as pained and direct as any I've heard from Iron & Wine, is leavened with background vocals recalling The Jordanaires. Sam Beam has called Beast Epic his "most personal" album to date. It is the first Iron & Wine album that he's produced since The Creek Drank The Cradle, though the results are vastly different. This album brims with surprise flourishes, classic touches and an appealing confidence that is evident on songs like “Call It Dreaming." After a decade and a half of prodigious expression and exploration, recording as both Iron & Wine and eponymously, Sam Beam confessed that he has finally figured out how to make records. He had me fooled all along. Beast Epic will be available worldwide through Sub Pop Records on August 25th. It's my favorite Iron & Wine album by a mile. - Jonathan Poneman Iron & Wine’s Beast Epic was written and produced by Sam Beam, and recorded and engineered by Tom Schick at the Loft in Chicago in July 2016 and January 2017. The musicians who played on Beast Epic include longtime Iron & Wine collaborators Robert Burger (keys), Joe Adamik (percussion), and Jim Becker (guitar, banjo, violin, mandolin), along with bassist Sebastian Steinberg (Soul Coughing and Fiona Apple), and Chicagoan Teddy Rankin Parker (cello). Beast Epic was mastered by Richard Dodd in Nashville, Tennessee. *The term "soft power" was cribbed from author and Harvard professor Joseph Nye, but used in a different context.