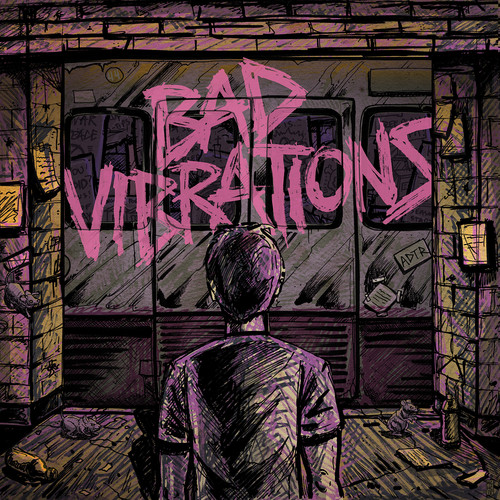 On their new album, Bad Vibrations, A Day to Remember claim to have approached the writing process with no expectations and organically came up with their finest work to date. ADTR have certainly come a long way since their beginnings in Ocala, Florida back in 2003. Through constant touring, hard work and persistence the band has grown to be the biggest in their scene. Their unique sound which mixes pop punk, hardcore and metal has been dubbed affectionately as “pop mosh” by their fans.

Over the course of their career, ADTR have sold out entire continental tours, landed two Top 25 Billboard debuts, sold over 2.1 million records and have 2 Gold certified Albums. According to Jeremy McKinnon, ADTR’s frontman, this album “… came together organically. We took some time to get together and write with no real expectations,” says the singer. The band took a trek up to Fort Collins, CO where they’d collaborate with Descendants’ Bill Stevenson who produced the album. The lead single “Paranoia” raced up the Active Rock Charts upon release , and McKinnon recalls , “That song just kind of came out of nowhere one day—and we were all really pumped on it.” Radio is just one key to this band’s success, as touring is front and center to the ADTR master plan. The band has curated their own music Festival, dubbed Self Help Fest – since 2014 – with the attendance growing each year. In March 2016 over 17,000 fans attended the fest in San Bernardino, CA. , which was headlined by ADTR and featured some of the best bands in the scene. They will kick off summer 2016 with a massive tour - 3 months of arenas and amphitheaters with blink 182. In 2016 - A Day To Remember will be everywhere.